Earlier today, a Haverhill, Mass., court convicted teenager Aaron Deveau of  motor vehicle homicide for texting while he was driving. It is one of the first cases of its kind following the state’s new law that bans texting while driving. The 18-year-old was allegedly texting, and it was this distraction which caused his car to veer across the center line and crash head-on into another vehicle. That car’s driver, 55-year-old Donald Bowley, suffered massive injuries and died after 18 days in the hospital. The court judge sentenced Deveau to one year in prison, suspending the rest of the concurrent sentences from the verdict.

The only positive thing in such a horrible situation is that maybe, just maybe, people will start thinking about their actions behind the wheel. To me, the idea of texting — which requires the use of both hands — while driving is just plain dumb. But then again, I’m not a teenager who uses texting as a primary form of interpersonal relationships. Maybe some of those teens, also new to driving, will hear of this case and see the possible consequences of this kind of distracted driving. I hope so. 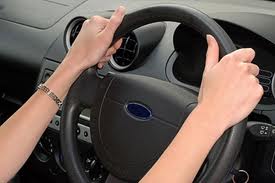 Then again, maybe it’s not just teens who need to pay attention. Even if you don’t text, you are probably just as distractible when you’re behind the wheel.

Think about it. How often do you glance away to change the radio or fiddle with your iPod settings? Or turn to talk to your passengers — or the kids in the rear seats? Or let your eyes linger over a neighbor’s pretty new landscaping? Or peer through the sunroof at the amazing sky at sunset?

In that instant, the world can change.

A number of years ago, I had just picked up the younger kids from preschool. It was an almost unbearably beautiful day. I had to drop something off at Town Hall, and took an atypical route home, up a pretty main road, the sort that garners my town all kinds of notice. The kids were bouncy and ready to get out and play. We were listening to music, singing along, laughing. Mitzi was unusually active, unbuckling herself and standing up a few times, ignoring my eyes in the rear view mirror and my repeated command to sit down.

Finally, I couldn’t take it — I turned around and raised my voice. And that’s when the crash happened.

The car in front of me had stopped short because the car in front of him had stopped to suddenly turn into the library driveway. I had looked ahead in just enough time to know that, despite slamming on my brakes and turning the wheel, there was nothing I could do to stop the impact. Nothing.

In the end, luckily, blessedly, no one was seriously hurt. Though I was driving at about 30 mph, the airbags did not go off. The kids had a few seat belt bruises, and I had a cut on my leg. More fortunate were the passengers in the other car — my car was bigger, heavier and I really smashed the holy heck out of the rear end. The passengers were all seniors, and a couple were taken to the hospital as a precaution (thankfully, none were hurt).

That accident lingers in my mind every day — I am even more cautious behind the wheel, and am a little paranoid about driving. I still have the occasional nightmare about it, and never take for granted that we all walked away.

Because, instead of hitting a car, it could have been a person I struck while distracted behind the wheel. I could have killed someone.

Today’s verdict is a sad one. One life lost, another irrevocably damaged, just because of a little stupidity, a bad decision, and a moment of distraction.

I hope at the very least we can all learn something from this story. When I first sat behind the wheel of a car, excited and eager, my mom, who was teaching me to drive, put her hand on top of mine and said, “This is a deadly weapon. Never forget that.”

Sledding is just not my thing.  In fact, any sort of activity that involves me propelling at high speeds down a hard-packed snowy/icy surface with little or no control is not my thing.  Sure, when I was a kid I loved sledding.  But a big skiing accident in high school really put me off the whole downhill thing.

Ray’s always been the parent to take the kids over to our local golf course to sled.  I’ve stayed home to enjoy some rare quiet time, or to hang out with the child(ren) not yet old enough to join the fun.  This year, though, I decided to get over myself and take the kids after school one day a couple of weeks ago.  Frankly, I was a little shocked by how steep the popular hill was, and how fast sleds went.   Being the scaredy-cat that I am, I had no interest in giving it a try, but, after her first run was so terrifying that she cried on the walk back up the hill,  Ellie begged me take her down.  So I did.  And I was right.  The ride was really fast and really scary.

Last weekend we all went.  This time, the snow was even icier.  Other kids had formed jumps that propelled sledders into the air like little cannonballs.  Most kids who went down wiped out, laughed, did it again.  That day it was Joanna who asked me to ride with her.  It started off badly — we turned sideways and I couldn’t right the sled.  We toppled.  She split her lip, I jammed my thumb.  Later, it was Cooper who wiped out, with a friend.   Fortunately, neither one was hurt in any serious way.

But it all made me wonder — why the HECK aren’t these kids wearing helmets?

We parents today love our helments.  We teach our kids to wear them while biking, riding scooters, roller skating, skateboarding.  Helmets are like car seats — we really can’t imagine our kids without them.  They’ve even become an accepted — required — accessory for downhill skiing these days.  But for sledding?  It doesn’t seem so.

That day, out of the dozens of kids hurtling down that icy hill — with their parents watching — fewer than six were wearing helmets, mine included.  I wondered why, and did a very limited (though informative) survey of some parents I know.  Most say they do make their kids protect their noggins while sledding (I guess those weren’t the parents at the golf course when I was there), but not for small sledding (like down the backyard slope).  Only one responded with an emphatic “no way!”

I heard a tragic story about a child who died while sledding.  I heard tales of broken bones and stitches and near-misses.  Many of us joked that we were lucky to have survived our own not-childproofed growing up, amid unbelted rides in pickup truck beds, open outlets waiting to electrocute us, gate-free stairways, unlocked toilet seats.  And that’s true.  But now we know better.

I know a helmet won’t stop one of my kids from breaking his or her neck or leg.  But it could save a life.

I love the water.  I always have.  When I was little, I was the kid who put on a bathing suit at 8 a.m. and stayed in it until bedtime.  First, it was splashing in the backyard blow-up pool or at my grandparents’ lake.  Later, it was at our summer house in New Hampshire, where small twin lakes graced our backyard.  As a teen, instead of walking or riding my bike, I’d swim from home to my job as a lifeguard.  Not faster, but surely more fun.

Swimming defined my summer days as much as anything, well into my 20s, as I continued lifeguarding at lakes, beaches, and pools.  I always dreamed of the day I’d have a luscious backyard pool, not only for myself, but also for the kids I hoped to have when I married.

Today our pool is still a blowup one.  Neighbors to the left and right have real pools, and we’re lucky to get invited to enjoy a swim from time to time.   On the days we don’t, my kids eye the fences longingly, unsatisfied with their own little play space.  I know how they feel.

And yet, part of me is very glad.

Last month in Massachustts, two sets of twin girls died, within weeks of each other, in their family pools.   In both cases, the toddlers wandered away from supervising eyes and bypassed safety fences.

Every year, 300 children under the age of 5 drown in pools.  Older kids are at as much risk, even if they know how to swim.

Drowning happens quickly, and it’s almost always quiet (no thrashing about for help like in a movie).  It just doesn’t look like drowning.

All of my kids but the youngest can swim on their own, some better than others.  Ellie is most reckless, leaping into the water with abandon, just like her mother did.  She also prefers a bathing suit during summer days, just in case the opportunity for a swim arises.

She scares me.  At age five, she is also the one who listens the least.  It’s not hard to imagine her sneaking over to the neighbors’ yard, deftly bypassing security measures (she’s awfully smart, too), and helping herself.  Some days I’d like to put a bell around her neck so I always know where she is.

I remind them repeatedly about water safety rules, admonishing them that a person can drown in just a few inches of water.  Like always, it’s hard to tell what they hear.  Still, I remind them, daily.

When they gripe about the pool situation, I shrug.  I’d love a pool of my own.  But maybe not until they’ve all moved out.

So, on this gorgeous August day, bright sunshine, low humidity, the first in a very long time, what do my kids decide they want to do?  Stay INSIDE and make a castle out of packing boxes they know I’ve squirreled away in the basement.  They are determined, probably because….

on Saturday, moments before we were expecting a bunch of friends and their children to arrive for a long-overdue barbecue, someone stabbed our blow-up pool to death.  Poor thing, never saw it coming.  Investigation continues, but it’s likely to be ruled an accidental aquaticslaughter.  Evidence:  calls for help revealed suspect with hands pressed over hole, desperately trying to prevent the life-giving air from leaking.  Bandages were applied, to no avail.  Slowly the pool succumbed to its injuries, leaving countless bathing-suit clad children to clutch their towels and wail.  Fortunately, the mourners rebounded and amused themselves in the sprinkler, as well as with the hose,  sand, and a jug of bubble soap.

The suspect confessed, weeping.  A beach umbrella was the weapon.  No motive.

The pool was buried at the local transfer station in a solemn ceremony.  In lieu of flowers, donations can be sent to the New Blowup Pool Scholarship Fund, which hopes to raise enough money to erect a new pool in the deceased’s memory.